How To Elope In The UK

Elopements are becoming more and more popular, both in the UK and abroad. Historically, people eloped to overcome families who disapproved of ‘the match’. However, we’re now seeing people opting for a more intimate experience for a whole variety of different reasons.

Elopements are ideal for free-spirit, live-in-the-moment type couples. It’s exciting, mysterious and a lot of fun! 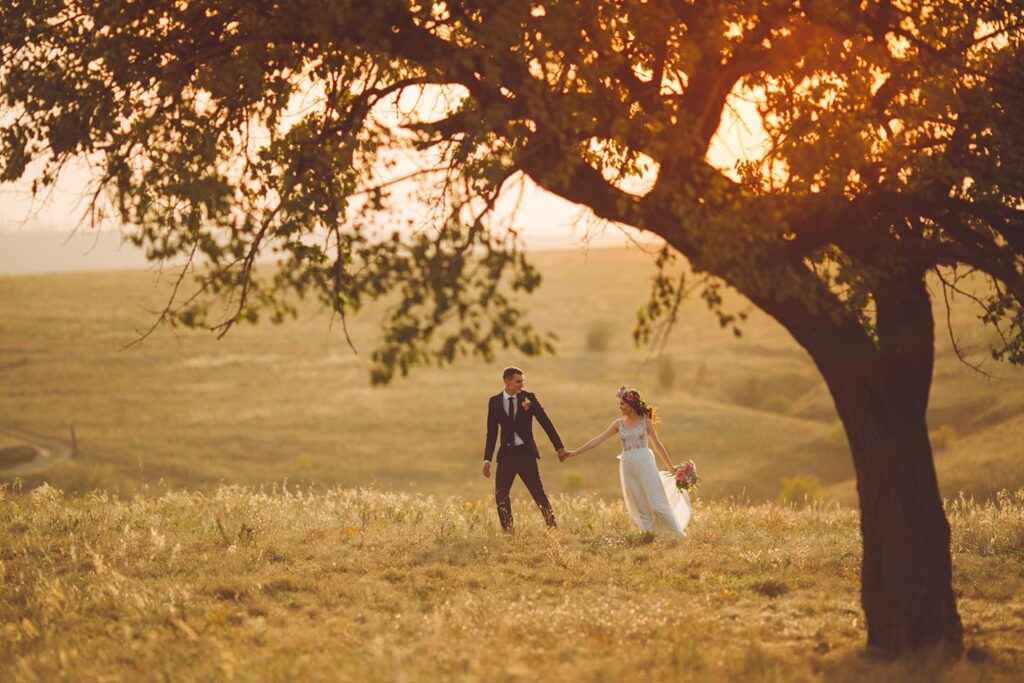 WHAT DOES ELOPING MEAN?

Before we get into the details, first of all, what does it actually mean to elope?

Although there are lots of positives to eloping, choosing to ditch tradition entirely is a big decision. Some people will be immediately drawn to the idea, while others will know it’s not right for them – both are totally fine!

HOW IS AN ELOPEMENT DIFFERENT TO A MICRO WEDDING?

Although on paper they share a lot of similarities, elopements and micro weddings are actually very different.

A micro wedding is essentially a scaled down version of a more traditional wedding day. They often include many of the features of a bigger celebration, just in a smaller and more intimate format.

An elopement, on the other hand, is centred solely around two individuals saying ‘I do’.

One of the easiest ways to tell the difference is by the number of guests. There will typically only be five people at an elopement wedding, whereas a micro wedding is normally defined as anything fewer than 25 guests.

I’ve written a whole guide to micro weddings, so check that out if you want to learn more. 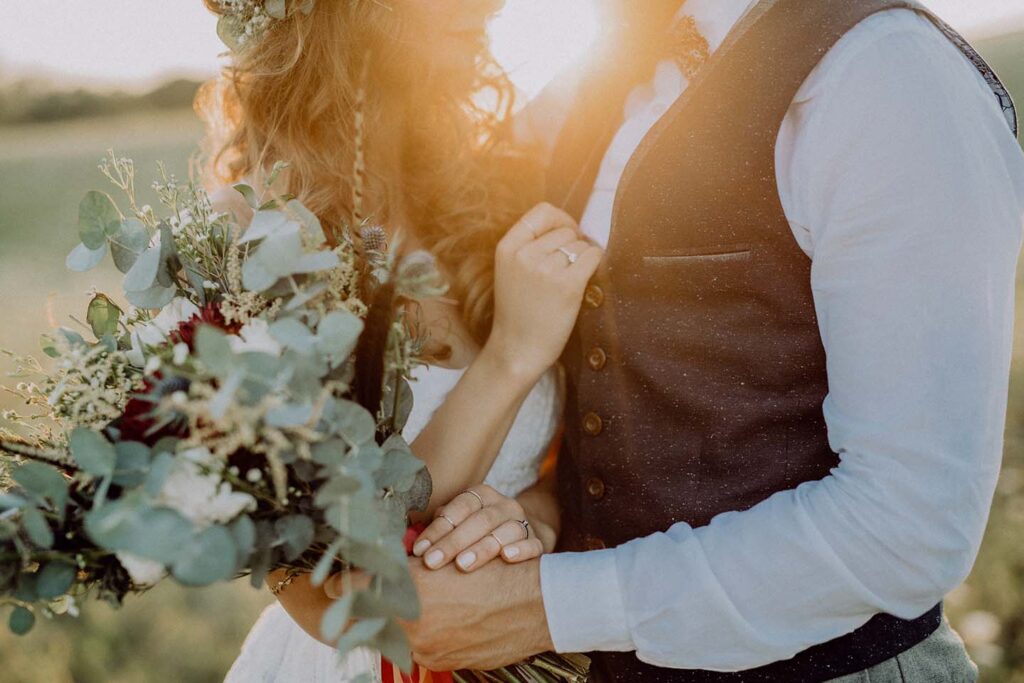 WHY DO COUPLES ELOPE?

There are lots of reasons why eloping is a great choice for many couples.

One big appeal is the cost. Due to their pared-back nature (almost no guests, no big party afterwards), elopements tend to be more affordable than traditional weddings.

While the average ‘full works’ UK wedding can cost nearly £32,000 (source), you can easily do an elopement for only hundreds of pounds, instead of thousands, if you want to.

You could divert some of those savings and combine your elopement with an incredible honeymoon, enjoying fancy hotels and bucket-list experiences. Just because it’s smaller, doesn’t mean an elopement needs to be any less extraordinary.

Another reason couples choose to elope is to save the time and stress of wedding planning. While some people are really excited about planning a huge celebration to include everyone they love, for others it’s really quite a stressful undertaking.

If you’re not the traditional type, elopements also give you a massive amount of flexibility to ditch the elements of a typical wedding that you don’t love. You don’t have to have a white dress if you don’t want, or be given away, or sit through lots of speeches. You decide.

In essence, eloping means you can focus more on the simple act of getting married, and worry less about everything else.

HOW TO ELOPE IN THE UK –  THE LEGAL STUFF?

People are sometimes concerned that elopements might not be legally binding. That’s not the case at all though – no matter what some people might think, an elopement can be just as meaningful, legal and valid as a big white wedding in a church or licensed venue.

Just as with any wedding, you just need to make sure you tick the right boxes in order to make sure the legal bits are all in order. In the UK, there are a few different official requirements you need to meet in order to be able to get married, such as:

And both opposite and same-sex couples can legally marry in the UK.

Previously, there have been strict laws on where you can get married, with only marriages taking place in certain registered venues being legally binding. However, there have been calls from the Law Commission for that to change.

The proposed changes would allow a couple to marry anywhere – outdoors, at home, even virtually over video call. You can read more on those here.

Fingers crossed the law does change, as it would give all couples so much more flexibility, as well as help alleviate the problem of so many venues being booked up due all the cancellations and postponements over the past year.

LET’S GET THE PLANNING STARTED

So we’ve talked about the hows and the whys, and maybe you’ve decided that an elopement sounds up your street. Now it’s on to the fun stuff – planning your wedding! 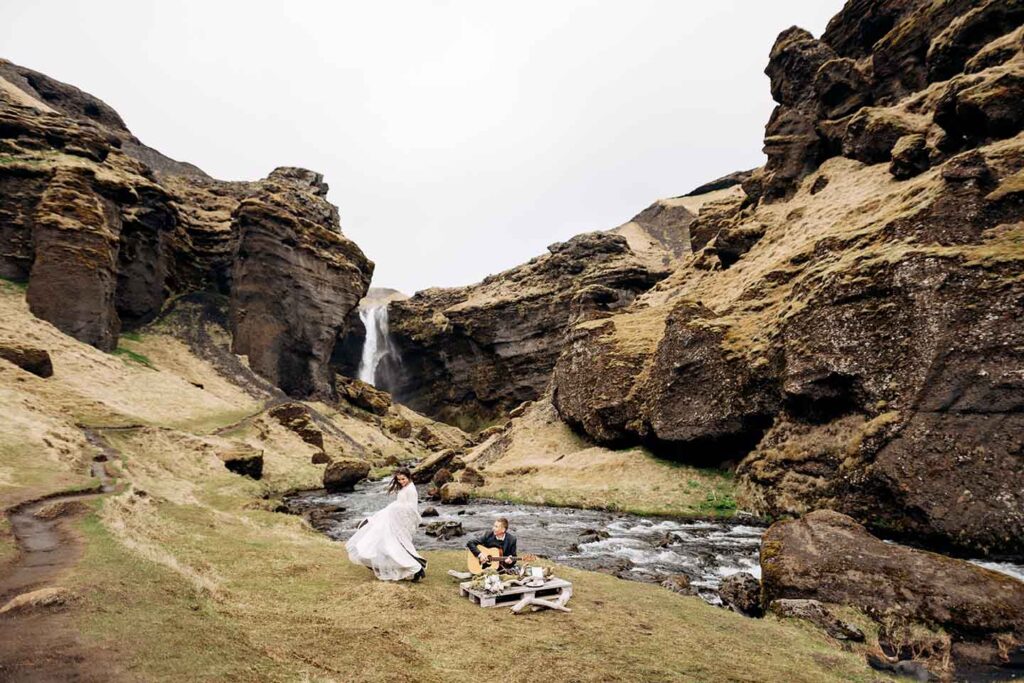 The first thing you need to do is decide where to host your wedding ceremony. This could be near to home or, as lots of couples choose to do, you may want to travel somewhere.

Some venues and companies offer elopement packages, or you can organise your own.

One of the main decisions you need to make is whether to go for a religious or non-religious ceremony. For some this will be an obvious choice, whereas others will need to think about it what is best for them. It’s a completely personal choice but here are a few things to consider.

Civil ceremonies tend to be more popular now in the UK. These can take place at a registry office or at an approved venue. So if you dream of saying your vows in a magnificent manor house, mountain cabin, or luxury resort – basically anywhere that’s not a church – this is the option for you.

In order to have a civil ceremony, you’ll need to ‘give notice’ at the registry office local to where you actually live, regardless of where you’re actually planning to get married.

Giving notice confirms your official intention to marry (whether via a religious ceremony or civil partnership). You give notice with a view to marrying within 12 months of that date, and you must register at least 29 days before getting married.

According to the Office of National Statistics (source), religious ceremonies now account for less than a quarter of all weddings. However, for some people the religious aspect is still central to their day.

For church weddings, the equivalent of giving notice is having the ‘banns of marriage’ read on three separate Sundays in the three months leading up to your marriage.

Just like with civil ceremonies, once you’ve given notice in this way you must marry within 12 months, but can’t marry with less than 29 days notice.

If you’re based outside of the UK, you can still give notice to marry within the UK as long as the country you’re in is part of what’s called the ‘British Subjects Facilities Act’, and your partner is a UK citizen.

GETTING MARRIED DURING COVID

I couldn’t write a post about planning a wedding right now without mentioning Covid! We are definitely living in unusual times and restrictions are affecting every part of our lives, including weddings.

At the time of writing we’re in a full lockdown, with weddings only being allowed in exceptional circumstances – such as if one partner is seriously ill.

There is some light at the end of the tunnel, and we are looking forward to restrictions on guest numbers and social distancing being lifted gradually over the next few months.

Opting for Elopements and Live Streaming

Some couples are opting for elopements but live streaming the ceremony to their loved ones, which is a great idea if you’re eager to marry soon but still want your friends and family to be a part of the day.

Guidelines are changing constantly so the best thing I can recommend is to keep checking the official government advice.

ANNOUNCING AND CELEBRATING YOUR ELOPEMENT

From the moment you get engaged right through to the ceremony itself, you have the choice to do things your way. Some couples will have a public engagement where they tell all their friends and family, but then prefer to follow this with a smaller wedding, like an elopement.

For others, there’s something romantic about the secrecy, choosing to keep the whole wedding experience under wraps, from the proposal right through to saying ‘I do’.

You could combine your announcement and celebration together by throwing a revealment party. This can be informal if you like – think a summer BBQ in your garden.

At its heart, an elopement is about getting rid of any unwanted expectations and traditions and marrying in a way that feels right for you as a couple. Declaring your vows solely to each other, without an audience, can be a really special experience.

It won’t work for every couple, but done right, an elopement can be relaxed and romantic – it’s all about the two of you, celebrating the love you share, together.

Ready to have a chat about a wedding or couples photoshoot?